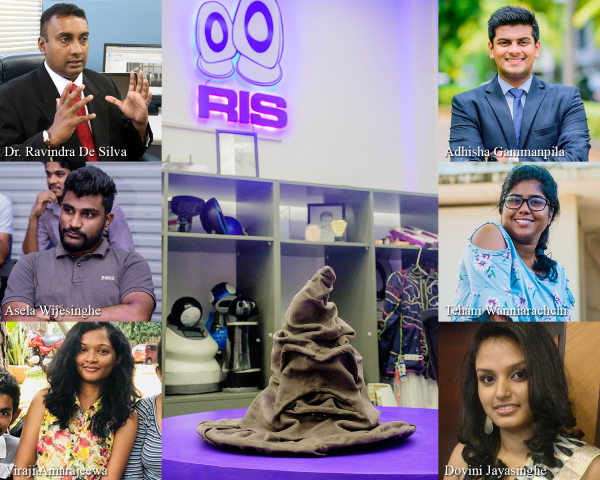 Magic is something that always mesmerizes and takes us into a whole new world. When it comes to fantasy movies, especially children fall in love with the fictional characters they come across in their favourite movies. Recently we witnessed the beauty of bringing magic into life by a group of students from the Faculty of Applied Sciences, Department of Computer Science, University of Sri Jayewardenepura. The team led by Adhisha Gammanpila, Asela Wijesinghe, Tehani Wanniarachchi, Viraji Amarajeewa and Dovini Jayasinghe along with the supervision of Dr. Ravindra de Silva was able to give life to the Sorting Hat from the famous Harry Potter as a social robot. In November 2019, the team was able to bring fame to the country by  winning the Global 1st Place Award at the International Conference on Social Robotics 2019 (ICSR 2019) which was held in Madrid, Spain.

However the journey did not stop from there as most likely by many other University projects. The team strived to do more.

Once again, the team was able to bring another victory for the country by winning the Global 2ns Place Award at the Student Design Competition of the Human Robot Interaction 2020 (HRI 2020) Conference which was scheduled to be held on March 23rd in Cambridge, UK. The conference HRI 2020 is also one of the iconic events of the academic calendar of social robotics similar to ICSR 2019 which the team was able to win in the previous year. Even though the event was held virtually due to the prevailing conditions across the globe the competition was held in a highly competitive manner. Out of the other winners, the 1st place was won by a team from Germany and the 3rd place was won by a team from Japan.

As Sri Lankans it is truly a proud moment for us as a nation to compete with such nations who are far ahead in Robotics technology and bring victory to the country.

The winning presentation done by the team lead Adhisha Gammanpila can be viewed via the following link :

and further information of the conference is available via : http://humanrobotinteraction.org/2020/best-paper-awards/.

Briefly sharing about the functionality of the social robot developed by the team (The Sorting Hat) is mainly designed as a mediator for autistic children. To add much clarity, it is not a cure nor a solution for autistic children but a supporter. Briefing about autism, it is a complex, neurological disease that typically appears during early childhood and doesn’t allow children to interact, express themselves and emotions challenging a person’s social skills. Therefore to support in overcoming these social challenges the team developed a social robot with the appearance of the Sorting Hat from the Harry Potter movie series.

Initially the project was started in the year 2019 January under the course Human Robot Interactions by Dr. Ravindra de Silva who is also the supervisor of this project. A key aspect about him is that he has over 18 years of experience in Robotics while in Japan and also the iconic figure who introduced Social Robotics to Sri Lanka. This is also a great example as we believe on the impact of the Sri Lankan experts transferring their knowledge back to Sri Lanka.

The team also takes this moment as an opportunity to thank everyone behind who made it possible to achieve this level of success. Especially to all the lecturers of the Department of Computer Science, the Dean of Faculty of Applied Sciences Prof. Laleen Karunanayake, the Innovation Invention and Venture Creations Council, the Vice Chancellor Prof. Sudantha Liyanage and also the former Vice Chancellor of the University and the current Chairman of UGC Prof. Sampath Amaratunge for the immense support extended. The team also extends their humble gratitude to Udaka Manawadu, Nipuna Vimukthi, Mahesh Samarasinghe, Afaz Deen, Kushan Hansika, Charitha Weerasooriya, Sajini Senaratna and all other members of the Robotics and Intelligent Systems Laboratory at the Department of Computer Science, University of Sri Jayewardenepura.